Freemasons know well of the many trailblazing, impactful men who journeyed through the craft before them. Few have ever left as stirring a legacy behind as Wolfgang Amadeus Mozart, the famous composer who forever changed Western music. In this piece, we examine his life, his brief but devoted experience in Masonry and how it influenced his career.

Wolfgang Amadeus Mozart is generally considered one of the greatest composers in the history of Western music. Mozart was born in Salzburg, Austria on January 27, 1756. His father, Leopold, was the one to discover the great talent his son possessed and undertook Mozart’s' education in all things. Amazingly, he had already begun composing music at the age of five and from then on produced some of the best pieces the world has ever heard. He spent his childhood performing for the nobility across Europe and writing sonatas, concertos and operas.

Uniquely, Mozart wrote and excelled in all the musical genres of his day, which was unlike any other musical composer in history. Some of his notable works are The Marriage of Figaro, Don Giovanni, The Magic Flute, Cosi fan Tutte, and the Jupiter Symphony. Much of Mozart’s work has come from Masonic values and beliefs. He wrote many pieces of music for the lodges and various Masonic ceremonies throughout his career. In fact, according to Robert Levin of Harvard University, an expert on the famous composer, “the last piece he finished before his death was K.23, ‘The Little Masonic Cantata.’”

Mozart was initiated into Austrian Freemasonry on December 14th, 1784 to Lodge ‘Zu Wohltatigkeit’ in Vienna. He joined the fraternity at 28 years old, was ultimately raised a Master Mason and was a loyal and engaged Brother until his death in 1791. Experts state that he is recorded in a list of members as having completed his third degree and is known to have been a very regular attendee of his lodge.

It is not known exactly how Mozart was first introduced to Freemasonry; however, he came from a family with a number of men involved with the Masonic lodges. Both his father-in-law and brother-in-law were Freemasons. As Levin notes, Mozart was drawn to Masonic lodges “because of their fascination with human dignity and freedom.”

Mozart’s dedication to Masonry is clear by his enrollment during the Catholic Church’s ban on Freemasonry. Pope Clement XII had prohibited membership in 1738, yet, seeing no conflict between the two, Mozart defied the church’s commands and joined Freemasonry. He remained a devout Catholic, composing more than 60 pieces of sacred music for the Roman Catholic Church, some of which were the most famous liturgical scores in Western history.

Freemasonry had a powerful effect on Mozart’s life, which can be seen through his various pieces of music. He wrote at least eight compositions for the Masons, including his Freemason’s Funeral Music. Experts also detect influences of Masonry in his famous opera “The Magic Flute.” To those that have studied his life and work, it is evident that Mozart made conscious use of Masonic themes and symbolism within his music. 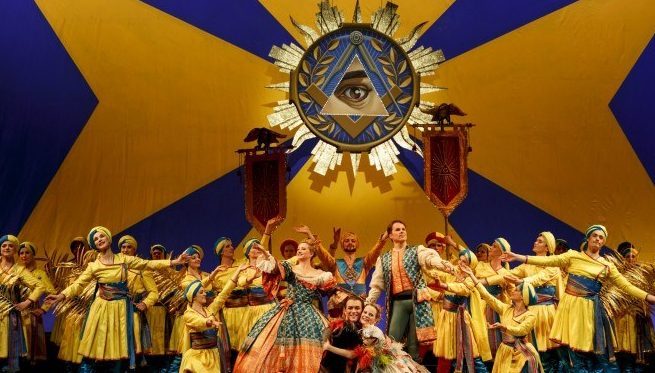 While Mozart established a legacy as one of the greatest composers of all time, he did not enjoy much glamour towards the end of his life. He spent his last years in much debt and, at times, depressed. He died tragically at age 35 and was buried in an unmarked grave, unrecognized by society. Through his struggles, Mozart often reached out to his Brothers for financial and moral support, often seeking comfort in various lodges during his time touring as well.

Despite the unfortunate final chapter of his life, Mozart left an everlasting legacy through his music. His works continue to inspire countless people and new generations across the world today. A man of unparalleled creativity and influence, we are proud to call him Brother.

Dear Brethren, I want to thank the 31 brothers that attended our first lodge ZOOM meeting of 2021! Jeff Slike, WM from Friendship Lodge No 663 did a fantastic job presenting his research on the story