2019: A Year of Giving, Growth and Brotherhood

As we enter into a new decade, we close the book on what was truly a momentous year for0 32° Scottish Rite, Northern Masonic Jurisdiction. The immeasurable generosity of our Brethren and the enduring bonds of Freemasonry were on display throughout 2019. As we reflect, it’s clear that the NMJ community is as vibrant as it has ever been.

To all our Masonic Brothers, thank you for choosing to lift others each day. In honor of an incredible year, we’ve put together some 2019 highlights from around the Jurisdiction that highlight the strength of our brotherhood.

Early last year we put a call out for submissions for Brothers interested in being featured in our 28 Days of Masons campaign. The goal? Throughout February, celebrate Scottish Rite Masonry on social media by giving members a chance to meet and learn about the men we call Brothers.

Our call was answered and over 900 submissions were sent in. We spent the month randomly choosing and featuring a different Mason on Facebook and Twitter, putting the spotlight on a few men who make our fraternity a beacon of light in the world.

After the success of our Even Better video, we knew we had to put something special together to follow it up. At last year’s Conference of Grand Masters in North America, Commander Glattly unveiled our video, Nice Guys. Instilling pride in who we are, and what we are as Freemasons, the video is the newest installment in our “Not Just a Man. A Mason.” campaign.

Sammy Lee Davis, 33°, is a military hero who was awarded the Medal of Honor for his bravery in the Vietnam War. During the war, Brother Davis performed an extraordinary act of heroism by saving three American soldiers from an enemy barrage.

Last spring, the Scottish Rite, NMJ created The Sammy Lee Davis, Defender of Peace and Freedom veterans recognition program in his honor. It is offered to members honorably discharged from the United States military or uniformed services. Since April, 5,255 veterans have already been recognized as Sammy Lee Davis Defenders of Peace & Freedom. Each recognized Brother receives a custom-designed pin and certificate to commemorate their military service and to honor their dedication to the core values of 32° Scottish Rite Freemasonry. 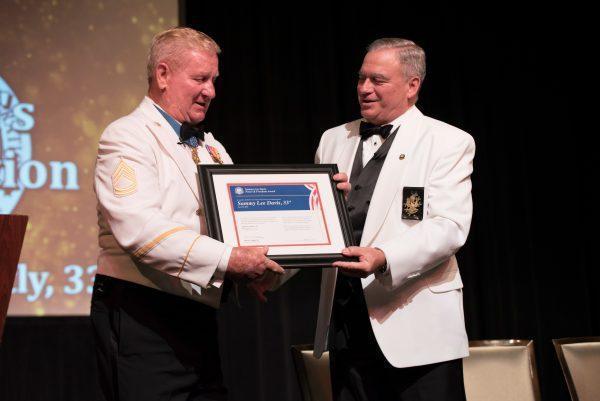 In August, the Scottish Rite NMJ hosted a glorious celebration in Milwaukee, Wisconsin. There were ceremonies to honor our Brothers who received the 33° degree, the Supreme Council Medal of Honor presentations, and warm welcomes given to the Scottish Rite representatives from countries around the world, including Haiti, Switzerland, the Czech Republic, Romania, Greece, and Italy.

While there was much to revel in throughout the week, the pinnacle of the week’s festivities arrived when 211 Candidates were conferred the 33°. It was an unforgettable time honoring these great men and their contribution to our fraternity.

To celebrate Scottish Rite Month in November, we launched a 33 Days of Brotherhood campaign. Through a series of emails and social media posts, each day from November 1st until December 3rd, we highlighted a different Brother from around the Jurisdiction. We also offered a recommended activity to help Brothers connect and better live their Masonic obligation each day.

During the 33 days, we heard uplifting stories about the great accomplishments of our brethren and saw Brothers relish in the opportunity to honor one another. It was a clear indicator that our efforts to leverage technology to deepen the connections between our members is proving effective.

The culmination of our 33 Days of Brotherhood campaign was our second annual Giving Tuesday telethon. A night of momentous generosity, Brothers from around the Jurisdiction donated to ensure we met our goal of $332,000. By the end of the night, the Scottish Rite, Northern Masonic Jurisdiction Telethon raised $420,584, nearly 30% more than our fundraising goal for this event.

Did you miss the event? Not to worry, our full recap of the inspiring evening is available anytime.

This is just a microcosm of the accomplishments made throughout the Scottish Rite, NMJ in the last year. Thanks to each Brother and their families, our fraternity is thriving. The pride we all feel in Freemasonry is clearer than ever. As we move into the new decade, we are excited for all that lays ahead and look forward to gaining more light together in the years to come.

Dear Brethren, I want to thank the 31 brothers that attended our first lodge ZOOM meeting of 2021! Jeff Slike, WM from Friendship Lodge No 663 did a fantastic job presenting his research on the story